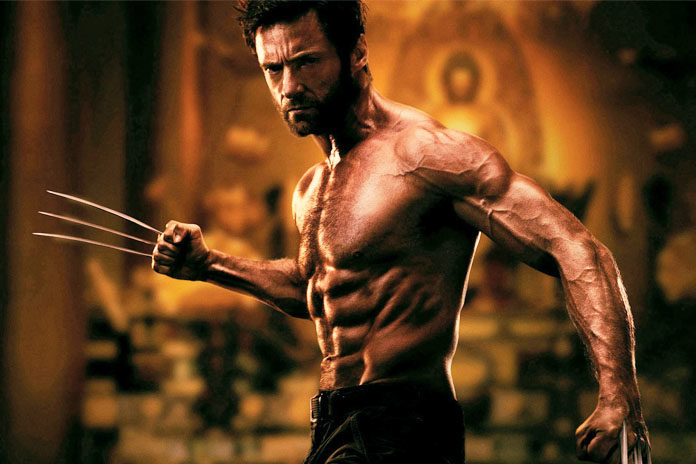 Hugh Jackman Workout – Hugh Jackman is the inspiration of millions of fitness freaks all over the world. And that is not without a reason. The Wolverine, now aged 47, can give youngsters half his age a run for their money when it comes to getting ripped and working out like a beast in the gym. 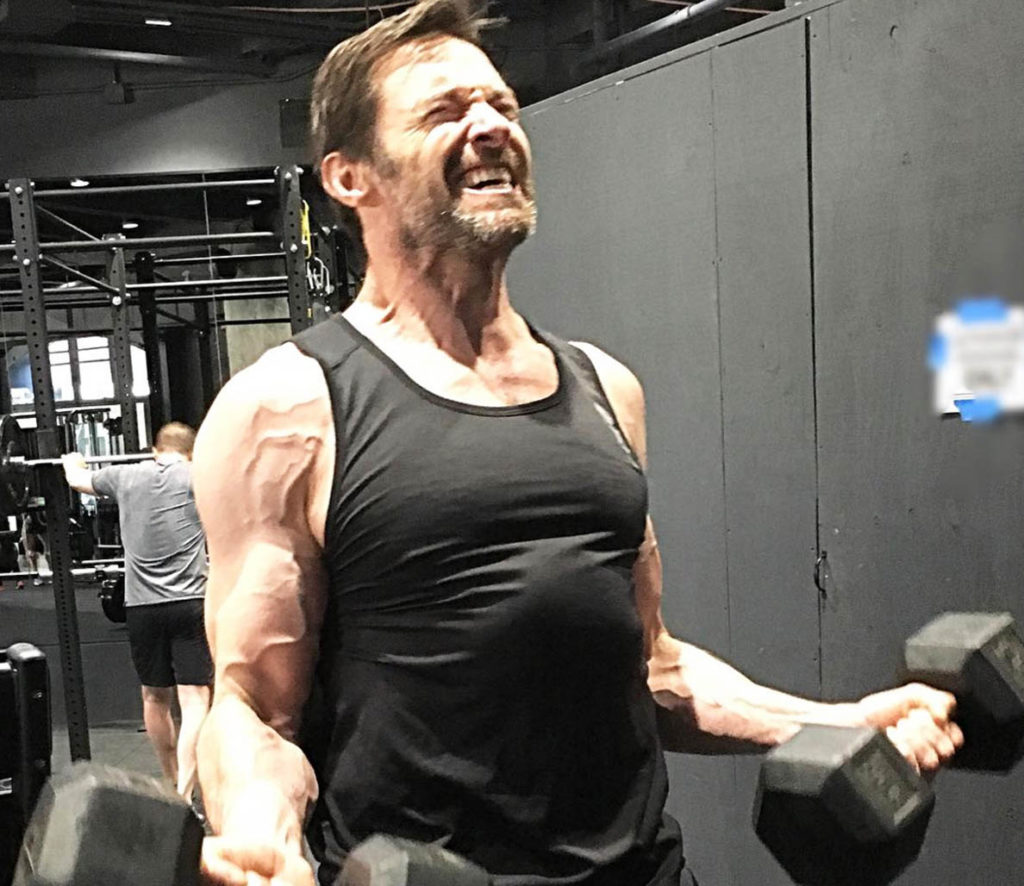 Watching Hugh Jackman working out in a gym through his Instagram account is sheer motivation and can inspire anybody to get fit. He caused a massive rage in the fitness industry when he entered the 1000 lbs club. He lifted 355 lb. in squats, followed by a 235 lb.

Bench press and finally did 410 lbs in the deadlift. You must have wondered what the secret of Hugh Jackman workout is? How can I get the Huge Jackman body?

Well, the short answer is you cannot. Hugh Jackman is one and only. And even if you can do the Wolverine workout, you must do it regularly without fail, six days a week like he does, and then perhaps you may expect to get a Hugh Jackman body. To further help you, we can tell you a few secrets behind the special Hugh Jackman training routine.

Today, you have so much of fitness information all over the internet that it is easy to get confused. Pick any fitness magazine or visit any famous fitness website and you will come across new, so-called revolutionary workouts every time which guarantee to give you six pack abs and melt those love handles away.

However, Hugh Jackman believes in pure, traditional, hardcore bodybuilding workout and gives his best in doing those bodybuilding split routines.

He trains a specific group of muscles on a particular day with a separate leg day. So, on Monday he will do chest and shoulder with triceps muscles while Tuesday it will be back and triceps. The other day will be the turn of leg and ab exercises. Yes, those dreaded leg exercises are in fact the secret behind those Hugh Jackman legs.

So, the idea is, don’t fret too much about the latest fad in workouts. If you are willing to give your sweat, every exercise can help you burn fat. Huge Jackman is the living proof in front of you who has adopted a traditional bodybuilding approach and got insane results from it.

2. Focus On Compound Movements And Supersets

Compound movements are movements that utilize joint movement of all muscles simultaneously. For example, while doing squats, you need to engage your core, focus on keeping your back straight as you use your quad and thigh muscles to lower yourself as if you are sitting on a chair. Most compound movements mimic real life movements like these and are a lot better in improving your functional fitness.

That is why if you look at Huge Jackman Wolverine Workout, you will find many compound movements like benchpress, squats, deadlifts, rowing, etc. Yes, complimentary moves are hard to do and will leave you more sore than isolating ones. However, you can see the results yourself by having a look at Hugh Jackman body.

If you want a body like that, you better focus on doing compound movements. The opposite of compound movements is the isolation exercises in which you exercise a particular muscle group with little or no use of other muscles.

For example, bicep curls. While isolation exercises have their importance to building specific muscles, they should only be a supplementary part of your workout and never overshadow the corresponding moves.

Next major component of a Huge Jackman workout is Supersets. Super sets refer to continuous sets without any rest in between. You can train the same set of muscles in these sets, or you can vary them to give rest to a particular muscle group while you train another.

For example, training opposite pair of muscle groups is an excellent idea to have a hard, awesome workout. Initially, when you start doing supersets, you may find it difficult to carry on due to less endurance level. However, soon you will get used to

3. Want Hugh Jackman body- Do This

High weight, low repetitions are one of the real keys to getting a Wolverine body. The reason is when you train with heavy weights; you are allowing to strain your muscles and giving them a chance to grow and get stronger. Huge Jackman typically trains in the range of 4-5 per set when he is doing heavy weights (and that is most of the time).

However, if you are a beginner, never start with doing heavy weight low repetition workouts. You should always aim first to learn the proper form of the exercise and then develop endurance to go on for 12-15 repetitions for 3-4 sets. Once you can achieve a perfect form and endurance, then it is time for you to start pushing yourself more like Huge Jackman with heavy weights and low repetitions to develop muscle.

Another essential element of Hugh Jackman workout is the low-intensity cardio in the morning. Huge Jackman’s trainer David Kingsbury says,

Low-intensity cardio on an empty stomach will lead to better fat metabolism. Your body will mainly burn fat as fuel when you exercise first thing in the morning. This is the best way to get ripped and lose fat when you are building muscles with weights.

Yes, you cannot neglect your diet if you want to have a Hugh Jackman body. In fact, diet forms 70% share of results which you will see in your body and exercise will only constitute the remaining 30%. Given the intense workouts, Hugh Jackman does, one would expect him to eat a lot.

This is, in fact, entirely correct. In fact, you will be nothing less than shocked when you hear about the Wolverine diet. He revealed in an interview that he consumes over 4000 calories in a day !!

Hugh Jackman follows the principle of carbohydrate cycling to stay ripped as well as muscular. That means when you want to lose fat without losing the bulk; carb cycling diet is your best option.

On heavy training days, Jackman consumes a carb rich diet primarily. However, a large quantity of these carbohydrates came from vegetables and not other sources. On the other hand, on rest days, he has to take a low carb diet to stay ripped. 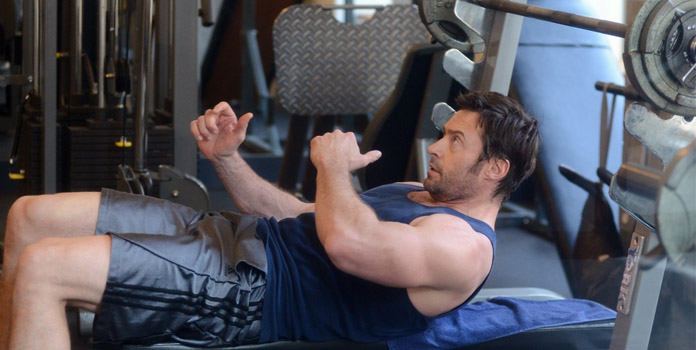 There were four basic compound movements which Hugh Jackman used to transform himself into a lean mean mutant Wolverine:

This Wolverine workout was prepared by his trainer David Kingsbury for getting him ripped and muscular. The plan carries the theme of progressive overload where you gradually increase the weights used during the workout.

To calculate ideal weight, one needs to find out the maximum weight which one can lift for one repetition. This is called W1RM. You do not and should not copy it exactly, but it will give you an approximate idea of how much work you need to put in to get that Wolverine body:

In the fourth week, Hugh Jackman lowered his intensity and focused on low weight and high repetitions. This is to increase the size of muscles after increasing their strength over the past three weeks.

If you follow the above principles of Hugh Jackman workout with sincerity, regularity, and discipline, we are sure that you can get an amazing body like Hugh Jackman. You will also love these practical and quick bodybuilding tips which will further boost your workouts.