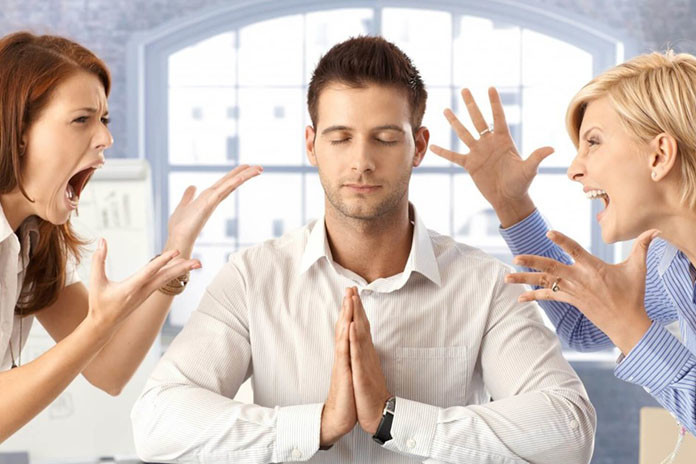 Toxic People – There’s already so much of stress, hassle, and monotony in your life. You don’t want to add toxicity to it. That’s why you should be avoiding people who can have a negative impact on your life.

Toxic people are a category that you should steer clear of! These people are blissfully unaware of how they can leave an indelible, negative imprint on your life. Then, they create a ton of chaos, lead to strife, fights, and complexities.

Research suggests that dealing with toxic people can increase your stress response. These people can prompt your brain into a stressed out mode, and that can have lasting effects on your physical-mental health.

In fact, dealing with toxic people can compromise the effectiveness of neurons, reduce your reasoning and memory while permanently destroying your brain cells. So, efficient management of stress is essential to deal with toxic people.

We are all surrounded by people who know nothing else but to waste time. They are like the dry sponge who soak up all your time and have nothing to give in return. Remember, time is money, and you don’t want to waste it. So, avoid hanging out with people who simply waste your time (or theirs)!

The Ones on ‘Judge’ Seat

Some people have an opinion about everything. And, then there are those who have judged everything! Judges are the worst kind. They will find every random reason to criticize and decry. They will neither listen nor appreciate.

Such people will let you down. While criticism is important for growth, constant reproaching practices have a negative effect. So, steer clear of these people.

It is important to know the negatives of a situation. However, too much of pessimism will ruin your life. People having a negative mindset can easily drain your positive energy. Such people just don’t have anything good to say.

Just like the judges, they always find faults or reasons to tell why a simple thing might not work. They aren’t focused on potential, and you shouldn’t be hanging out with them.

Confidence makes you sure about your abilities; arrogance is the contempt for weak. So, don’t confuse someone’s arrogance for their trust. Know that arrogant people have an inferiority complex (which they hide through superiority complex).

They have domineering self-worth, assuming that they are superior to others around them. That’s annoying and awful for your development.

We all want success. And it’s great to have people around us when we strive for it. However, some people aren’t there around you to show their appreciation, but they are rather there for the jealousy and envy that they have for your growth. They cast doom on your success. And you don’t want to risk your chances of success for them.

If you are looking to play the ‘blame game,’ then these are the experts. They never own up to their mistakes or shortcomings but are always ready to criticize others for doing the same.

According to them, they are the victims, and everyone does wrong by them. They are just never at fault- they are always the victim. What they want is sympathy (among other benefits). You shouldn’t be wasting your time on them.

Everybody Lies! But some do it compulsively, even for the smallest of things. Whether they do it for fun or to save themselves from an embarrassing situation doesn’t matter, because you should be wary of them. Such people are simply dishonest, serve their selfish interests, and are insincere and manipulative.

Don’t let people use you! You don’t want to become a toxic person by turning into ‘the victim.’ So, avoid manipulators and exploiters. They are dishonest crooks who always befriend you with hidden agendas.

And once their agendas are taken care of, they move on. It could be someone trying to get an introduction to an important person, job interviews or a date. They are such that they would throw you off the track or ruin your life if that is what it takes for them to solve their purpose.

And you don’t get anything in return. Remember, most often they disguise themselves under the wrap of ‘friends!’

The One who is Stressed Out

Stress can be good sometimes. It can help you reach a deadline or do your best. But too much of stress, especially coming from someone else isn’t good for you! Now, you already have so many of your stress, imagine dealing with the pressures that others have for you! So, don’t go cuckoo and distance yourself from such stressors.

We didn’t write ‘Gossip Queens,’ because it’s not just women who gossip. In fact, men are known for gossiping way too much! And while it might seem cool or even de-stressing, it is a waste of time. It can even lead to animosity and rumors. So, don’t be with a gossiper no matter how enticing it seems.

The one with Short Fuse

Everyone gets angry. But some people get angry too often. These short tempered people are psychologically underdeveloped. As a result, they have difficulty in controlling their emotions. Their anger management issues lead to occasional outbursts, which others have absorbed.

And then they waste time, there’s always a chance of them being aggressive. Their emotional intelligence is lower than others. So, don’t surround yourself with such people!

Take a hard look at you. Are you surrounded with any of these toxic people? If yes, then it’s time you take charge of your life! Don’t let such people ruin your life!