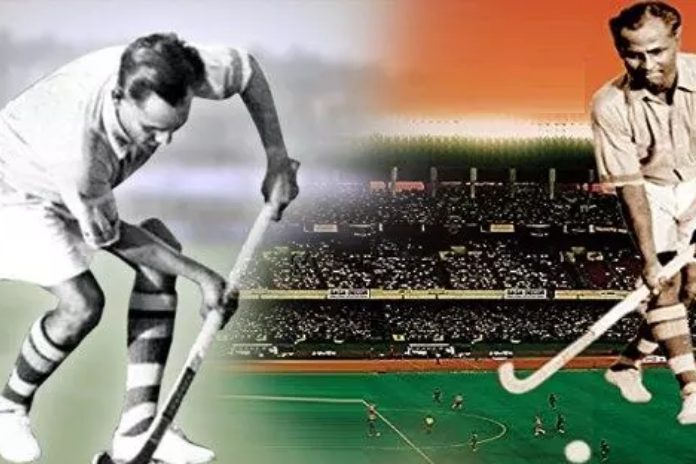 Best Hockey Player in India:- It is very hard to choose the best hockey player in India because every player has his strength and weaknesses. So we cannot judge them like Dhyanchand is better than Roop Singh, but we can differentiate them on their achievements.

That’s what I have done today, I have made this list of the top 10 best hockey players in India based on their achievements. Each of these players has a huge fan following and they are among the famous hockey players of India.

Major Dhyanchand is in the 1st position in our list of best hockey players in India. He was born in 1905 in Prayagraj. Dhyanchand is popularly known as the wizard of hockey. He was a magician of hockey. Great people like Hitler also got hypnotized by his art of playing.

He won 3 continuous gold medals for India. Dhyanchand is the player who illuminates the name of India to the global stage. He was also offered good money to play for Germany but he denied it. He played for India and only for India.

Major Dhyanchand is an Indian famous hockey player. Due to his great practice, many people also believed that he uses a magnet in his stick. But it was not a magnet, It was his practice. In the Olympics of 1938, he had scored 11 goals against Germany.

Roop Singh is the 2nd best hockey player in India. He was born in Jabalpur in 1908. He is one of the greatest players in the history of hockey. Due to his amazing performance, one road is named by his name in Germany. People of Germany treat him like the god of hockey.

He came into the limelight after his 3 goals against japan and 10 goals against the USA in the Olympics of 1932. He had won gold medals 2 times in 1932 and 1936. With his extraordinary skills, he had Impressed the whole world in the 1936 Olympics.

Balbir Singh gains the 3rd position in our list of best hockey players. He was born in 1923 in Punjab. Last year in 2020 he died at the age of 96 in Mohali. Many other players in the Indian team are named Balbir Singh so people call him Balbir Singh senior.

He is Popularly known as modern-day Dhyanchand. Because Dhyanchand had played before independence and Balbir played after independence. He was a 3-time gold medal winner in London, Helsinki, and Melbourne. Due to his extraordinary skills, people call him the great hockey players of India.

Mohammed Shahid is one of the best hockey players in India. He was popular for his dribbling skills. India won the gold medal in the 1980 Olympics during the membership of Mohammed Shahid.

Shahid started his career by playing in the junior team of India. later he had also got the chance to play in the senior team because of his fast running ability and ball dribbling. Shahid was also honored with the Arjuna award, Padma Shri, and many more national and international awards.

Udham Singh is the 5th best hockey player in India. In the initial days, he had played through the Punjab police team. But later on in 1949, he made his international debut against Afghanistan. Singh is among the top Indian hockey players.

In the Olympics of 1952, 1956, 1960, and 1964, India won 3 gold and 1 silver medal in the membership of Udham Singh. He had also served as a coach in the Indian hockey team. After he retired from international hockey, he decided to train young players.

Dhanraj is one of the best Indian hockey players. Former captain of the Indian national hockey team, Dhanraj played hockey professionally for 15 years. He had scored more than 170 goals in his career.

Dhanraj is an inspiration for every Indian who wants to be a hockey player. He was also honored with Padma Shri and many other awards. Nowadays, he is working as a coach in a hockey academy in Gujrat.

Claudius is the 7th best hockey player in India. He was born in Bilaspur, a city in Chattisgarh. In the initial days, he was interested in football but due to the advice of his senior players, he had joined hockey. Claudius is the only player in the world who had won 100 caps.

In addition to that, he is the only Indian player who won 4 Olympic medals. He won the gold medal in 1948, 1952, and 1956. and silver medal in 1960 by playing as a captain of the Indian team. After winning 4 Olympic medals, he was also named in the Guinness book of world record.

Claudius is one of the most famous player of hockey in India. He has been retired in 1965 from all kinds of international hockey matches. and lastly, he was died on 20 December 2012 due to some liver diseases.

K.D. Singh is popularly known as “Babu”. He was one of the best hockey players ever born in India. Many people compare his skills to major Dhyan Chand’s playing skills. Singh was the greatest dribbler of all time. No person in the world has the dribbling ability like Singh.

P.R. Sreejesh is the 9th best hockey player in India. He was a former captain of the Indian hockey team. Sreejesh was born in a very small village of Kerela in a family of farmers. He started playing at a young age for school tournaments. But he did not become a professional player until he was brought by his coach Jayakumar.

Ajit Pal Singh is the 10th best hockey player in India. He was born in 1947 in Sansarpur, a small village in Punjab. He was the former captain of the India team. Ajit was a center-half player in all kinds of hockey matches. India won the world cup in 1975 in the membership of Ajit pal Singh.

He made his international debut in 1960 in a tournament played in Mumbai. Due to his tremendous performance in matches, he became one of the top 10 hockey players in India. He was also honored with the Arjuna award in 1970 and Padma Shri in 1992.

So here we end with our list of the best hockey players in India. These all players have given a legendary performance in all kinds of national and international matches. If I have missed any player then comment below the name.