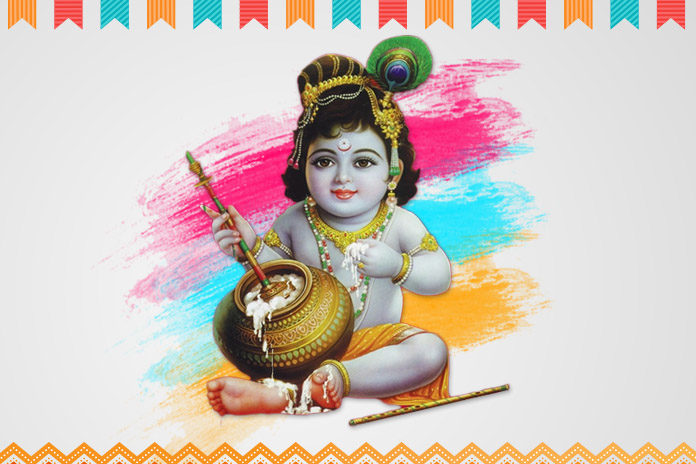 – Lord Krishna in the Bhagavad Gita

No matter if you are living in India or outside India, come August 25 and you will perhaps find a group of Indian devotees celebrating a festival called Krishna Janmashtami.

Krishna Janmashtami – is one of the most important festivals celebrated all over India and the world by Indians. It commemorates the birth of Lord Krishna- one of the favorite Gods of most people in India.

He was the Eighth incarnation of Hindu God, Vishnu and came to this world to get rid of widespread evil during that time. Mythologers and astrologers peg the date of Krishna birthday around 3225 BCE. He lived for around 125 years before leaving the mortal world in 3100 BCE.

There is something about Lord Krishna which makes him the most loved and followed deity among Indians. He is also known as the complete incarnation of Vishnu as he represents the perfect form of human life.

He was a naughty prankster in childhood, a devoted son, passionate and pure romantic lover, a faithful friend, a skilled player of flute, a mighty King, intelligent strategist, master planner, and much more. Krishna was the epitome of perfection who has managed to capture the attention of Indian devotees like no other God for past three millenniums.

The story of Sri Krishna Janmashtami is as fascinating as Lord Krishna himself – magical, mysterious and full of miracles. Let’s have a brief look at the events which conspired before and immediately after the birth of Lord Krishna.

1. Plea for Help by The Mother Earth with The Creator

It is said that during those times, evil had reached monstrous proportions in the world. Good people were suffering immensely under the atrocities of evil rulers and King. The Mother Earth could not bear to see this condition and pleaded with Lord Brahma- the Creator. Brahma, along with other demigods prayed to the Supreme Lord Vishnu for his help.

Lord Vishnu assured Brahma and other demigods that he would appear on the Earth in human form and will destroy all evil forces from the world. Brahma asked those demigods to start taking birth on the earth so that they could be present before the birth of Vishnu. Those demigods in human incarnations formed the Yadav clan in which Vishnu was to take birth.

On the other hand in this world, there was a king called Kamsa who was the most cruelest and evil rulers in the world. He had wrongfully displaced his father King Ugrasena of Yadav dynasty and became the king himself. His sister Devki got married to a man called Vasudev.

When Kamsa was returning to his kingdom with his sister and brother-in-law after their marriage, a voice boomed in the sky. It gave a prophecy that the eighth son of Devaki would cause the destruction of Kansa.

Hearing the prophecy, Kamsa wanted to kill his sister there only, but Vasudev promised him to hand over all his sons to him immediately after the birth. Kansa agreed to spare Devaki’s life but imprisoned her along with her husband Vasudev in one of the prisons of his palace.

4. Kansa Kills Six Sons and the Birth of Balram

Kansa brutally killed first six sons of Vasudev and Devki. The seventh son of Devaki was Balram, but he was miraculously transferred from her womb to the womb of Queen Rohini in Vrindavan. Kansa thought that it was a miscarriage, so he waited for the birth of the eighth son.

5. Birth of Sri Krishna at Midnight

Just before his birth in human form, it is said that Lord Vishnu appeared before Devki and Vasudev and assured them that he was coming to the earth as their son. He asked Vasudev to take him to Mathura to Yashoda and Nand who will take care of him in childhood till he grows up.

Lord Krishna was born at the stroke of midnight in the prison cell. Before Kansa could reach the cell, Vasudev took Krishna in a basket. Several miracles happened simultaneously to enable him to take Krishna to his destination.

The metal chains binding Vasudeva were automatically released, and the guards of prison cell fell asleep during that time. The flooding waters of Yamuna magically receded as Vasudev crossed the river to reach Yashoda’s house. He left Krishna at their doorstep and returned to the prison cell.

7. Celebrations in Mathura and Vrindavan

Next day, people in Mathura joyously celebrated the birth of a boy to Nand and Yashoda. Krishna performed many miracles in his childhood. He killed various demons, protected people of Mathura by lifting Govardhan mountain on his finger, mesmerized cows with his flute music, and charmed the Gopis of his village with his antics.

When he grew up, he eventually killed Kansa and freed his parents from prison.

He became a mighty King and set up his capital in Dwarka (present day Gujarat). However, his major role was in the epic war of Mahabharata where he enlightened the war hero Arjuna through Bhagavad Gita.

Bhagavad Gita remains the most sacred book of Hindus with the complete essence of Vedas, and its lessons continue to be highly relevant in the modern world.

People in India celebrate Shri Krishna Janmashtami with utmost devotion and joy. They observe fast throughout the day and break it at the time of midnight when Sri Krishna was born. Krishna loved food items made of dairy such as milk, butter, buttermilk, so his devotees make these things during the time of Janmashtami.

They decorate grand statues of Krishna in a lavish way. For the whole day, they perform various religious ceremonies in the temple. In the evening at temples, devotees chant hymns, sing prayers, kirtans (Janmashtami songs) and offer their prayers to the Supreme God.

They recount stories and incidents from the life of Krishna and learn from his ideas and teachings. During the time of midnight, statues of Krishna are uncovered in temples and devotees celebrate his birth by singing devotional songs and Janmashtami songs.

Janmashtami in Mathura and Vrindavan:

Sri Krishna Janmashtami is celebrated with most vigor in Mathura and Vrindavan. Krishna was born in Mathura whereas he spent a large time of his youth in Vrindavan. People in these two places celebrate Janmashtami with maximum enthusiasm and gusto. Particularly in Vrindavan, people start celebrating the festival in 7-10 days advance.

In both places, children between the age of 10-13 years dress up as child Krishna and enact Rasleela in front of an audience. Rasleela is a type of dance drama which Lord Krishna used to perform with Gopis.

You can also see another event called Jhulanotsav in Mathura in which people decorate swings with flowers in their houses and temple courtyards. It is used to denote the cradling of baby Lord Krishna after his birth.

More than 8 lakh devotees from all around the world visit Mathura during Krishna Ashtami to celebrate the birth of Lord Krishna. One of the most famous temples of Krishna in Mathura, Dwarkadhish Temple, has a grand statue of Lord Krishna. On the occasion of Janmashtami, people give it a ritualistic bath of milk and curd.

In India, the region of Maharashtra witnesses the most active and popular Janmashtami celebrations. There are hanging earthen pots (handi) full of milk, curd, fruits, or buttermilk (dahi) at various locations in Mumbai and Maharashtra.

It is said that Lord Krishna used to love eating butter and milk products. He even used to tease his mother by often stealing the butter from the house. Due to this Yashoda used to hang butter in earthen pots where child Krishna could not reach.

However, Krishna used to make such human pyramids with help from his other friends and steal butter anyway. People organize Dahi Handi competitions to enact those actions of Lord Krishna in his childhood.

Dahi Handi celebration has become a highly competitive and paid game in Mumbai with lakhs of money offered in prizes. Several political organizations and sponsors offer this award money to various groups of the human pyramid.

You will be surprised to know that one such group entered into the Guinness Book of World Records in 2012 for making the highest human pyramid. The group named Jai Jawan Govinda Pathak from Jogeshwari, Mumbai, formed a human pyramid with a height of 43.79 feet (13.35 m). That Dahi Handi event took place in Thane and broke the record of Spain which was made in 1981.

People from all over India will celebrate Krishna Janmashtami on August 26 this year. If you are going to be in India during this time, do not miss the Krishna Janmashtami decoration in any temple of Lord Krishna. Do not forget to share your experiences with us in the comments below. HAPPY KRISHNA JANMASHTAMI 2016!