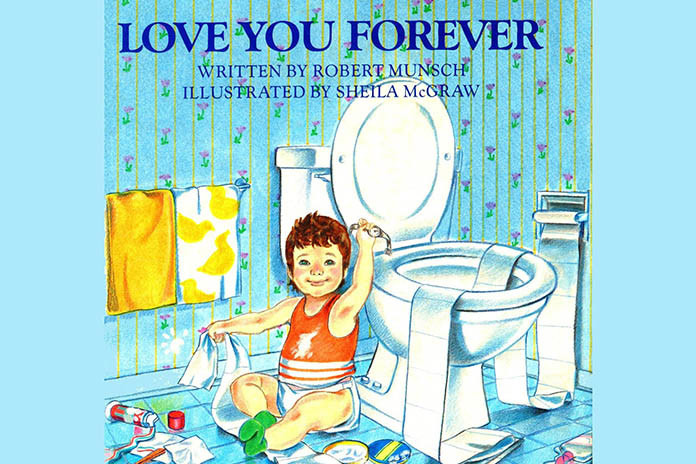 Related: Kids of Working Moms Are Better Off.

The song in this book, “I will love you forever, __________ my baby you will be,” truly captures the affection that a mother has for a child. Listed fourth in Publishers Weekly ‘All-Time Bestselling Children’s Book” for a paperback, this brilliant novel has been a cause of debate, with some calling it a touching account of a mother’s unconditional love and others calling it an example of parenting gone bad too far!

But no matter what, the book has managed to evoke emotions. And recently, it brought us to tears! In fact after knowing these simple facts of Love You Forever, you will certainly perceive it in a different light.

Recently, the author of the book, Robert Munsch discussed how the song in this book was inspired. We have to say that the inspiration is heartbreaking, but a reflection of the undying love that parents have for their children. He wrote on his website that the song was originally meant for his wife, with whom he had two stillborn babies.

The book, which originally described the cycle of life by associated the song with the evolving relationship between a mother and her newborn son. It narrates how a precious baby grows up to be a troubled child and exhibits exasperating behavior throughout his youth. Then it goes on to show the unconditional love that the mother still has for him.

In fact, and it might sound creepy, the mother goes to his bedroom every night to cradle him in her arms and sing him the lullaby. Years past by and the son enters adulthood, leaves home and gradually becomes a husband and father. The elderly mother still sneaks into his room at night to sing him a customary lullaby.

Over the years, as the mother becomes old and weak, the love doesn’t fade. Later, the son visits her for the final time and sings her the altered rendition of her lullaby, vowing always to love her unconditionally as she did.

After he returns home in a scene, which implies the death of his mother, the son rocks his newborn daughter and croons her his mother’s customary lullaby, indicating that the cycle continues.

While the whole idea of the mother going into an adult son’s room might seem strange, the whole story, written decades ago now appears in a new light. The actual reason behind the song and the truest facts about the love you forever leave us heartbroken.

On his website, the author has explained that while the song stemmed out of the two still-births, he could never sing it because it was too painful. The experience of losing two children had left an indelible imprint on his heart.

But once, when he was telling stories at the University of Guelph, he realized that the song could be made into a story. And that’s how Love You Forever came into existence. Today, the song from the book has been sung by millions of mothers.

Perhaps, now the readers can truly perceive the pain that went into writing this book. But the true fact about Love You Forever isn’t the inspiration behind the book, it’s the hope of love that it brings. The book is a stunning example that even though parents and children may share an evolutionary relationship, their love for each other is truly undying.

Readers can still rejoice with this book. Because of their hope, Munsch and his wife are now adoptive parents of three.

Also Read: Teach These Words To Your Kids For Their Better Financial Future.