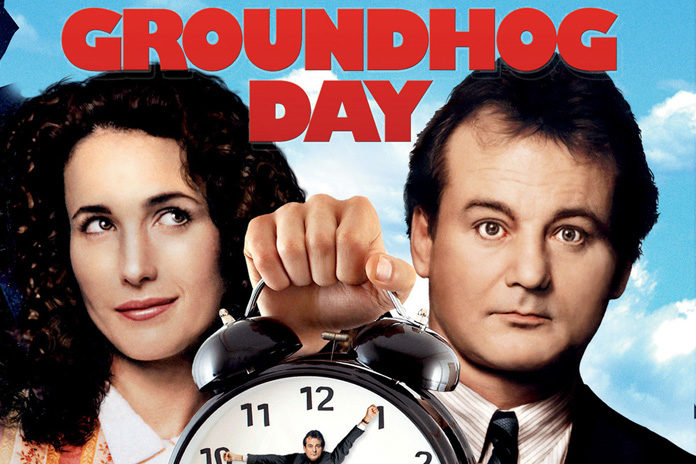 Groundhog Day Movie – Imagine spending the same day of your life over and over again. How would you feel? What would you do if you find yourself in this situation? The cult-comedy Groundhog Day movie featuring Bill Murray attempts to explore this theme and emerges as an ultimate feel-good movie exploring the real meaning of life.

If you live in the states, it is highly unlikely you have not watched this film yet. Celebrating Groundhog Day on February 2 has almost become synonymous with repeat viewings of this movie even though people may eagerly await the prediction of Punxsutawney Phil from Pennsylvania.

No matter how many times you have watched it, you’ll be surprised to know these top 10 behind-the-scenes facts about Groundhog Day movie:

1. Bill Murray was not the original choice for the lead role

Although the director Harold Ramis had worked with Bill Murray many times before this movie, he never considered him to play the lead role in Groundhog Day. He had offered the role to Tom Hanks initially who had to reject it as he was busy filming Sleepless in Seattle.

2. Originally the director planned to have the lead character stuck in one day for 10000 years!

Nobody knows exactly for how long Phil was stuck on Groundhog Day in the movie. However, its director had revealed that he was there for 10 years but originally they had planned for 10000 years!

3. A family of six groundhogs was raised just for the film production

To give an authentic look to the movie, the production crew also had an animal trainer who raised a family of six groundhog babies for the filming process. You can even see him in the movie as the wrangler who hoists the groundhog in the ceremony.

4. Bill Murray was bitten twice by the groundhog rodent during the shooting of the film

5. A crowd of nearly 30,000 people attended the real ceremony after the release of movie

When the movie released in 1992, it immediately showed signs of attaining a cult status although critics at that time did not consider it a classic. The impact of the movie became clear when 30000 people began attending the real Groundhog Day ceremony that takes place at Gobbler’s Knob in Punxsutawney.

6. One brother of Bill Murray also appears in the Groundhog Day movie

Brian Doyle-Murray who is one of the five brothers of Bill Murray also appeared in a cameo in Groundhog Day movie. He played the role of a Groundhog official at the ceremony.

7. Groundhog Day truly attained a classic status in 2006 when it was added US National Film Registry in the Library of Congress

In 2006, Groundhog Day became one of those evergreen movies that are considered “culturally, historically or aesthetically significant”. It was added to the reputed Library of Congress merely 13 years after its release.

8. The idea of the Groundhog Day movie was inspired from The Gay Science

German philosopher, Friedrich Nietzsche had called The Gay Science “the most personal of all [his] books”. It was based on the life of a man who lives same day again and again. Writers of Groundhog Day movie took inspiration from this book.

9. Late director Harold Ramis and Bill Murray never spoke to each other after this movie

Yes, as shocking as it may sound now, but Groundhog Day movie was the last outing of Ramis and Murray together. They frequently had arguments on the set throughout the shooting due to differences in their ideology about the movie theme. Ramis wanted it to be a comedy film whereas Murray wanted a philosophical touch to it.

10. The movie was never shot at the real place of ceremony in Punxsutawney, Pennsylvania

You might be under the assumption that the movie was shot at the real location. However, it is not true as the shooting took place in Woodstock, Illinois. Coincidentally, the place was situated around 45 miles from the real birthplace of Bill Murray.

It is hard to find a person who does not like the Groundhog Day movie. It is not just a comedy drama but also has a deep, spiritual significance that has made it the favorite topic of many religious discussions. The above trivia and facts will surely make it even more interesting to watch the movie again on February 2 this year.

Depending upon, whether Phil sees its shadow or not on the Groundhog Day, you may even feel like watching these Easter movies on the loop to get into the spirit of spring early.