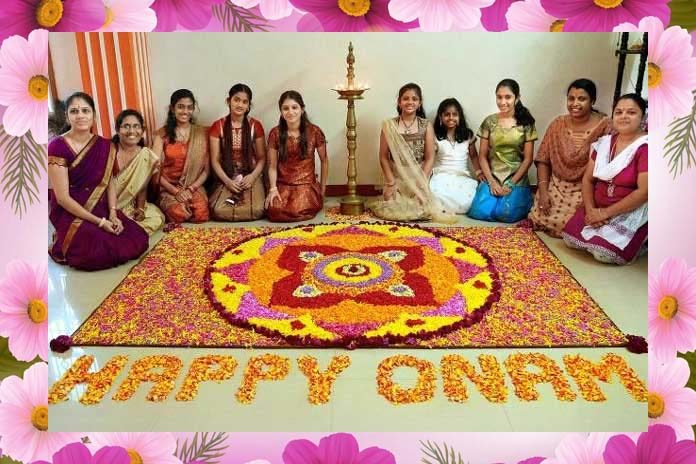 Related: The Story of Onam.

Onam is a Hindu festival primarily celebrated in the southern state of Kerala. It is the most widely celebrated and famous festival in Southern India. Although the main Onam festival lasts for four days (Uthradam, Thiruvonam, Avittom, Chatayam), the celebration begins in a week advance and go on for ten days.

The festival symbolizes the peace, happiness, love, equality, truth, and justness in the times of the reign of Mahabali. People fondly remember him as a benign ruler who gave his everything including his life to ensure the wellbeing of his people.

Onam is celebrated in the first month of Malayalam calendar known as Chingam. Chingam typically falls during the month of August- September according to Gregorian Calendar. In addition to being the first month of the Malayalam New Year, this month also marks the starting of the harvesting period after the monsoon season from June to August. That is why Onam is sometimes also known as the harvest festival in Kerala.

Onam celebration begins 10 days in advance from the day of Thiruvonam- the day of main Onam. In 2016, the 10-day Onam Celebrations have already kick started on September 4 with ‘Athachamayam’ celebrations. 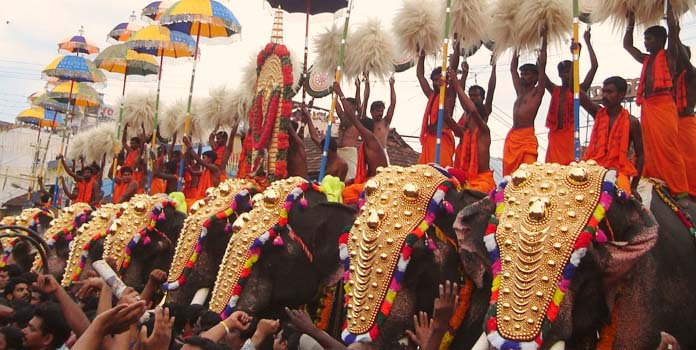 The first day of Onam Celebrations is also called as Atham whereas the main Onam falls on a day called Thiruvonam which is on September 14 this year.

On the day of Atham, a colorful procession is organized in Thrikkakara which is the primary place of Onam festival. Thrikkakara is a municipality in the Ernakulam District and a suburb of the Kochi city.

According to the legend, Vamanamoorthy Temple called Thrikkakara temple was the place where Vamana had stepped on Mahabali’s head sending him to the nether land. The temple is at a distance of around 15 Km from Ernakulam and serves as the primary center of Onam celebrations.

On the day of Atham, the temple organizes a special flag hoisting ceremony and a grand procession marked by the showcase of dance, culture and musical traditions of Kerala. The parade boasts of traditional dances like Mohiniyattam and Kathakali in addition to Pulikkali, Mayilattom, Kolkali, Theyyam, and Ammanundam.

Throughout 10 days, various ceremonies take place in the temple, and idols of God including Vamana are decorated by priests. Priests decorate the Vamana statue in 10 different incarnations of Lord Vishnu throughout 10 days leading to the final festival. They also carry the Vamana idol on an elephant who roam around the temple grounds followed by a group of caparisoned elephants. 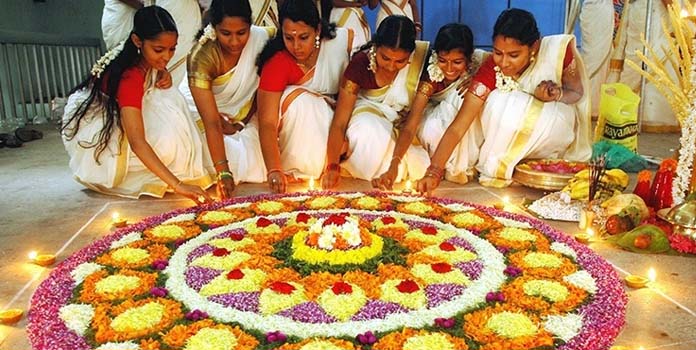 Another major highlight of Onam celebration is Onam Pookalams which are Onam Rangolis made of flowers. People decorate their house fronts with Pookalams. Many organizations even organize Pookalam competitions during the festival.

In addition to Onam Pookalam, Ona Sadya is also highly popular among people celebrating Onam. It is a grand Onam feast consisting of different types of delicious dishes that are served on the main Onam day.

The feast is served on a banana leaf and consists of twenty-one homemade curries along with two varieties of Payasam (dessert) and banana chips. Thrikkakara Temple also organizes a grand Onam Feast on the main Onam day in addition to serving Ona Sadya daily. If you are new in the city, you can enjoy Ona Sadya at many restaurants in Trivandrum.

Attire and Other Festivities 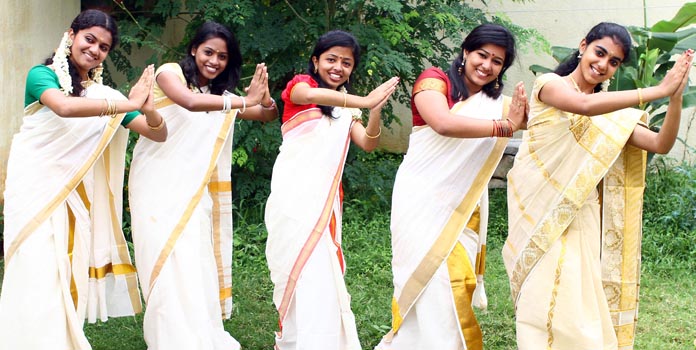 Ladies often wear white sarees with golden borders and take part in a traditional ritual dance called Thiruvathirakali. There are many other fun-filled activities during Onam festival. These include the famous snake boat races, tug of war (Vadamvali), and musical chair (Kaserakali).

Overall, people celebrate Onam with lots of fervor and vigor, especially during the last four days. The schools and colleges are usually closed during this period whereas everyone celebrates the main Onam on the second day of Thiruvonam.

How are you going to celebrate Onam this year? Let us know in the comments below. Happy Onam 2016!