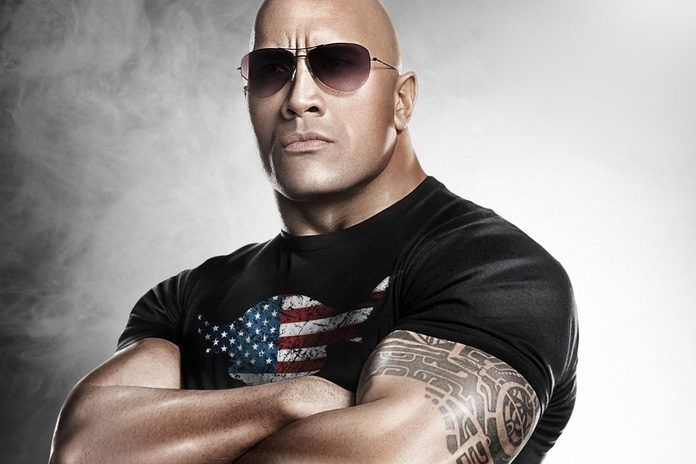 Although there is an element of genetics involved in the incredible physique of Dwayne Johnson, the disciplined and focused Dwayne Johnson is a huge reason behind that strong physique. You must dedicate yourself wholeheartedly to the process of building a body like Dwayne Johnson.

So, are you ready to go through these steps for a Dwayne Johnson workout and get a body of your dreams? At the end of these steps, you can also find The Rock workout routine.

1. Get Disciplined More Than You Have Ever Been In Your Life

The first and foremost thing you need to be worried about before you start following Dwayne Johnson Workout Plan is the insane amount of discipline and hard work required for it. A huge part of the success of Dwayne Johnson workouts is that he is passionate and dedicated on the level of crazy about following them religiously.

Moreover, this is despite the fact that he is a super busy Hollywood star who is most of the time shooting for a hardcore action movie. The shooting itself takes a toll on his body but still he never compromises with his workout and diet.

2. You Have To Love The Pain Of Working Out 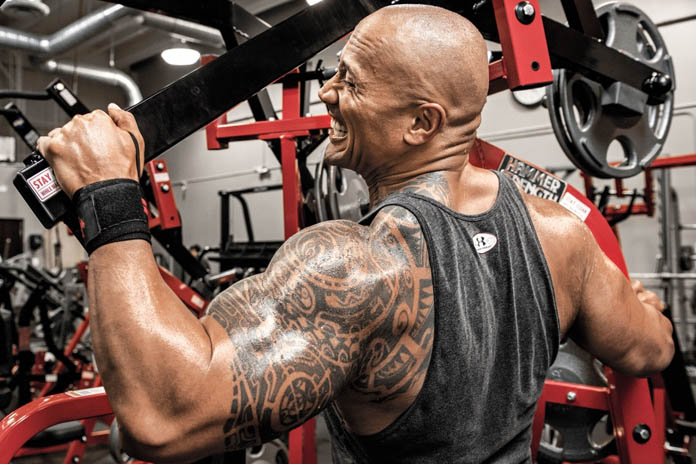 You can never consistently follow the Dwayne Johnson workout plan if you do not enjoy working out from your heart. There is simply no other alternative if you want to have the Rock body. As Dwayne The Rock Johnson himself says,

“Working out is my therapy, and it’s cheaper than a shrink. I can’t imagine my life without training, honestly. Working out anchors my day. For me, training is my meditation, my yoga, hiking, biking, therapy all rolled into one. I love it.”

If you cannot love that level of hard work and putting your body through serious hardcore workouts six times a week and 90 minutes every day, you should never even dream of training like Dwayne Johnson. 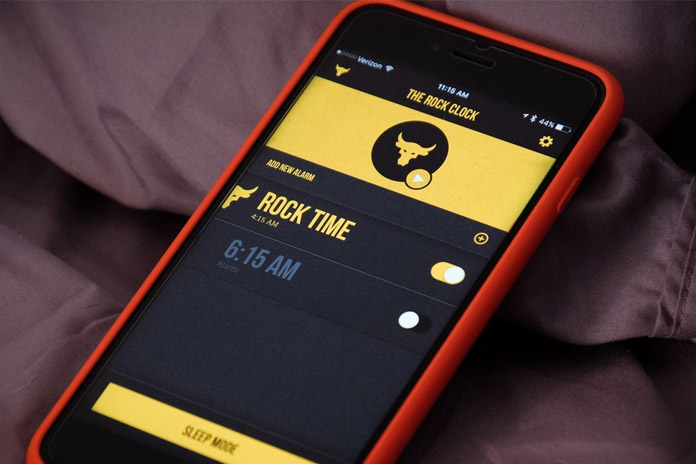 If you have not seen the sun rising in last 3-4 months, then the Dwayne Johnson workout is simply not for you. The Rock wakes up at 4 AM and sometimes even before that when he needs to reach for shooting early.

He famously calls that 4 AM time as his “anchor” when the whole world is awake, and the superstar is out there sweating it out on the road with his headphones on. Waking up regularly at 4 AM is a daily ritual which Dwayne Johnson has followed consistently over the past few years. So, if you want a body like him, you better start adopting this routine immediately.

4. Warmup In Dwayne Johnson Workout Is Longer Than Your Whole Workout

Do not expect to have lazy mornings once you wake up at 4 AM if you want to follow the Rock workout routine. Dwayne Johnson does an hour long cardio workout after he wakes up at 4 am in the morning. Either he is running in his neighborhood on pavements at the crack of dawn, or when he is in the gym, he is running on a treadmill.

“I DO STEADY STATE CARDIO FOR ABOUT 45 TO 50 MINUTES AT MY HOME GYM. OR, I MIGHT HIT THE ROAD OUT IN THE NEIGHBORHOOD. AND THEN, I’LL GO TRAIN.”

At times, he is also on elliptical trainer or stair climber as they have a little impact on joints than running. In any way, at the end of this hour-long cardio, he is completely drenched in sweat while most people are still far asleep in their beds. Can you do that?

5. Be Prepared To Lift Heavy, Hard, And Often 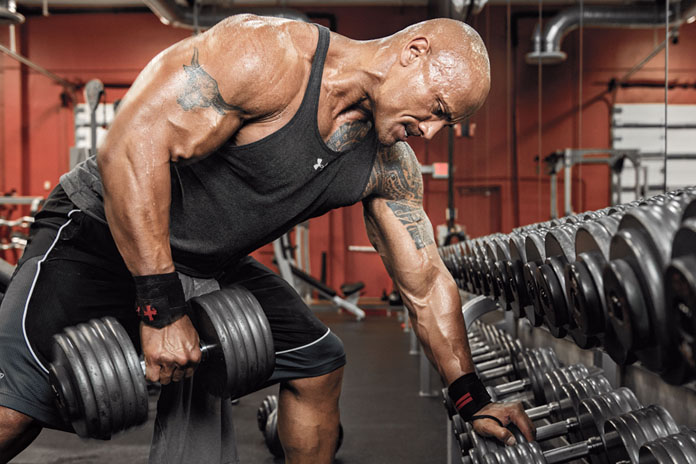 This is the most important portion of Dwayne Johnson workouts, perhaps only next to the crazy diet The Rock intakes. Johnson often calls it as “banging and clanging” in the gym. He normally does four sets of each exercise with 12 repetitions on each set with 60-90 seconds rest in between. Most importantly, he is always working hard in the gym and gives his best.

“I don’t play around in the gym. I always aim to be the hardest worker, and I make sure I clang and I bang to the best of my ability,”

So, you need to be mentally prepared and then actually lift heavy, hard, and often. The progressive overloading of weight is what makes the muscles of anybody grow, be it The Rock or you.

Dwayne Johnson usually employs the method of training by pyramid structure. Pyramid structure is a weightlifting routine where you begin with high repetitions and low weight in the beginning. During this time, the focus is on maintaining form in each repetition and learning it well enough. Slowly, with every passing week, you increase the weight while reducing the number of repetitions.

The Dwayne Johnson workout routine typically starts with 12-15 repetitions in the first week of the month. By the end of the month, he only does six repetitions with weight increased to the maximum level.

Next month, he again starts with higher repetitions with greater weight than what he had started with in Week 1. The rest period is generally between 45 to 60 seconds depending on the weight and repetitions.

The amount of muscle that Dwayne Johnson usually maintains on his large six ft. 4 inches muscular structure is just staggering. You may think that he must be doing something drastically different than others which give him an extra edge.

However, there is a simple secret of Dwayne Johnson workout. Although he used to follow different workout plans in the beginning, over the past few years, The Rock workout routine revolves around the traditional bodybuilding method.

That means he trains different body parts- legs, chest, back, biceps and triceps, and shoulders on separate days. The only principle you need to follow is that of good form and continuous improvement.

8. High Repetitions for Arms and Biceps 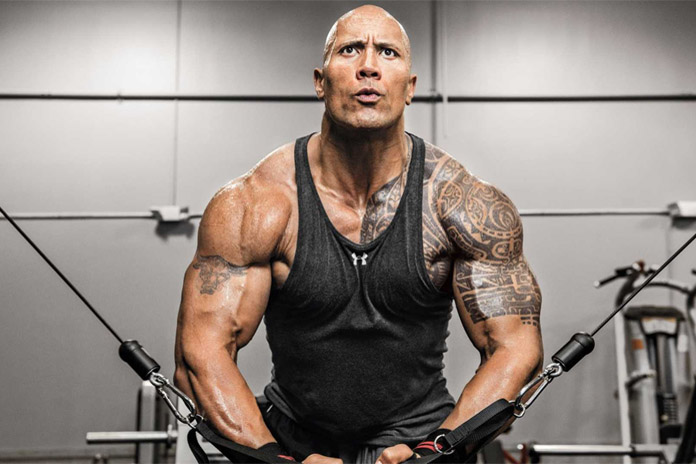 Many people do isolation exercises for arms and biceps but often in a wrong manner, at least according to the trainer of Dwayne Johnson, George Farah. He says that the muscles in arms are usually small and will get burn out quickly if you train them with massive weights.

However, this is what the most people do. Instead, you want to train your biceps and triceps with high intensity and proper form to have that pump. So, you must focus on doing high repetitions for arms instead of just increasing the weight. You must go for a range of 10-12 repetitions always for biceps beginning with one set of 15 reps to get that pump.

9. No Excuses, Only Results

Did you know that the king of exercises, squats, are not a part of Dwayne Johnson Workout Routine? Before he was a Hollywood star and professional wrestler, The Rock also represented his college team in football and even won a National Championship. During his time in college, he suffered a knee injury due to which he cannot do squats without aggravating his condition.

However, this did not stop him from loving the much-dreaded leg days at the gym. He did not make an excuse for the inability to do squats and instead passionately engage in other leg exercises such as Lying Leg Curls, Seated Leg Presses, and Smith Machine Lunges instead. 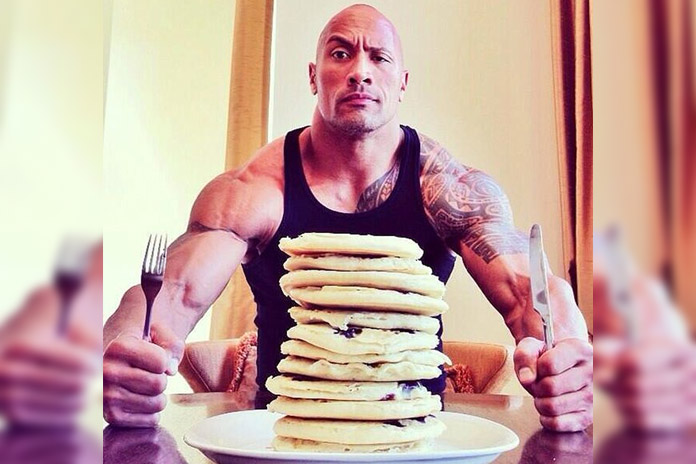 The Rock diet is perhaps the strongest and hardest part of the whole workout routine. You will be utterly shocked to know the amount of food Dwayne Johnson consumes in a single day. To sustain that huge muscular body, he consumes nearly 5000 calories a day and usually eats five meals to seven meals a day.

Although his diet varies according to the kind of physique he is aiming for in a movie, it pretty much involves plenty of fibrous carbs, proteins, and starchy vegetables. The common food items you can see on the plate of the Rock include egg whites, broccoli, chicken, baked potato, leafy salads, asparagus, mushrooms, oatmeal, onions, halibut, and casein protein.

In addition to this, he also takes a lot of supplements and protein shakes to build and maintain his muscles on a regular basis while keeping his body lean. The most significant aspect of The Rock diet is the serious amount of advanced planning and management to have all foods on time. He is extremely well prepared and organized while planning out his diet in advance depending on his training goals.

By this time, you have got a pretty good idea how much discipline and hard work you need to put for doing Dwayne Johnson workout. However, you will be relieved to know that you are allowed to treat yourself once in a week like The Rock.

The only rule is no cheating on the other six days. If you want to have a glimpse of what is the Rock’s idea of a treat, then have a look at this: 4 Double Pepperoni Pizzas, 12 pancakes with syrup, and 24 brownies with a Jug of Milk! Yes, that is the weekly cheat meal of Dwayne Johnson and like his diet and workout, even the cheat meal is gigantic even though it sounds delicious.

The above Dwayne Johnson workout and training plan surely looks tough and disciplined. However, it is supposed to be like this as it is The Rock you are talking about. He is not just a wrestler but now a full-fledged action superstar in Hollywood.

Forbes recently named him the highest paid actor in the world in 2016 whereas he also appeared in the list of the most influential people of the world by the Time magazine in 2016. The popular fitness magazine, Muscle and Fitness also declared The Rock as the “Man of the Century” in 2015. He is truly an inspiration to millions of fitness freaks all over the world. So, what are you waiting for? Get busy “banging and clanging” in the gym now!

Also Read: Jillian Michaels Workouts To Be Fit Like Her