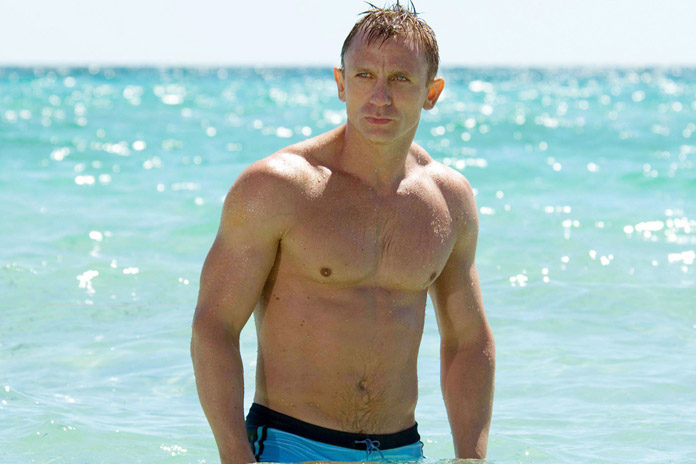 Daniel Craig Workout And Diet – The name is Bond- James Bond!! The super spy of British agency MI6 has captured the minds of generations of people all over the world. Since his appearance on the celluloid, many actors have played the role of super sexy and suave Bond like Sean Connery, Roger Moore, Pierce Brosnan, to name a few.

The current James Bond, Daniel Craig has been unlike any other Bond before and perhaps the most realistic Bond ever on silver screen. A huge reason behind it is the fantastic physique of Daniel Craig which he sported in Casino Royale, Quantum of Solace, Skyfall, and Spectre.

The lean and ripped physique of Craig enabled him to live the character of a dangerous super spy quite realistically before the camera.

Today we bring you the secrets of Daniel Craig James Bond workout which transformed him into a lean and mean killing machine feared by his enemies. You will not only learn the fundamentals of Daniel Craig workout but also know about the James Bond diet. Towards the end, also discover the unique Daniel Craig Workout Routine.

1. Focus on Muscular Definition rather than Addition

Daniel Craig has perhaps been the most different James Bond as compared to sexy, suave actors like Pierce Brosnan, Sean Connery, and others. He gave a different angle to the James Bond and made him look like a real spy agent rather than someone just equipped with a lot of modern gadgets.

For this reason, Craig had to look a lean and muscular killing machine who can kill enemies with bare hands if need be. So, instead of putting on muscle and beefing his body, Daniel Craig workout was focused on getting the ripped and lean look instead of a massive, steroid-like look. It is due to this reason, why his James Bond workout was so different from regular celebrity workouts.

Moreover, we must say the results were quite impressive, to say the least. Daniel Craig looked more like a real James Bond would look in modern time. To the disappointment of many there were comparatively less or no gadgets in Daniel Craig James Bond movies.

However, viewers were left spell bounded by the incredible physical prowess of the new Bond who can jump from buildings, fight with his bare hands, break bones, and look breathtaking without a shirt.

To achieve the required look, Daniel Craig did not follow those traditional split routines of bodybuilding that focuses on individual muscles on each day. Instead, James Bond workout was based on circuit training and training of whole body muscles instead of isolating them.

No rest in between the sets allowed the heart rate to remain up which led to a number of calories burning and a cardio effect during strength training as well. Also, these exercises primarily focussed on full body, compound movements instead of different body parts as it enabled a higher calorie burn.

“It is functional, dynamic, and not aesthetic. It is all about using as much natural body movement as possible. It’s all about adapting exercises to be more efficient, so the body moves through all its natural functions and you are not inhibiting it. I try to keep away from kinds of exercises that are isolating.”

Circuit training refers to a series of exercises which are performed in a particular sequence without any rest in between consecutive exercises. These exercises typically train different muscles of the whole body so that one can carry on to another exercise with negligible rest in between.

So for example, two days, Monday and Friday in Daniel Craig Workout routine consisted of doing exercises like Clean & Press, Weighted knee raise, Weighted step-ups, Pull Ups, Incline Push Up, and Triceps Dips in succession without any rest. He used to perform 10-15 repetitions of each exercise and did 3 circuits of these movements.

To lose fat for a lean look, Daniel Craig also included cardio in his workouts. He used to do light cardio exercises and stretching on his weekends. However, there was a difference from the regular cardio exercises.

Instead of spending long hours on a treadmill and having separate cardio days, Craig included cardio within his weight training routine. On three days in a week, he does weight training exercises targeting specific muscle groups on each day.

While doing these exercises, Craig took minimum rest in between exercises keeping his heart rate alleviated throughout the duration. This gave him benefits of cardio as well in the weight training routine itself allowing him to build muscular endurance as well as lose fat by burning more calories.

According to the trainer of Daniel Craig, Simon Waterson, the James Bond workouts were:

“A blend of power lifting, with a lot of compound exercises thrown in. This allows you to work out extremely hard with heavy weights, and because it’s so intense the heart rate is elevated. Therefore, you are working not only on the development of nice lean muscle tissue, but you’re also getting a bit of cardio as well, and keeping your body fat down.”

Unlike other celebrity hardcore workouts, Daniel Craig workouts were for only five days in a week allowing plenty of time for active rest to the James Bond actor. The rest was particularly needed because of high intensity and grueling full body workouts of Daniel Craig during weekdays.

On weekends, Simon Waterson asked Craig to do light cardio, swimming, or yoga for stretching and flexibility of the body. This allowed him to recover properly before going on exercising again next week.

You cannot expect to get a body like James Bond if your diet is not under call. In fact, diet constitutes anywhere between 60-80% of the results you will see from those hard workouts. If you look at Daniel Craig James Bond body, such excellent muscle definition and lean look can not be achieved by any workout on its own unless complemented with a diet.

So, let’s now have a brief look at key points of Daniel Craig diet which he followed to get into the shape of super spy James Bond:

No surprises here as you cannot expect James Bond to eat junk food full of calories and refined sugar. Daniel Craig followed a 100% clean diet with green, leafy vegetables, whole grains, fruits, nuts, brown rice, fish, salad and all those things you should be eating but do not. Moreover, it goes without saying that there was no place for any junk food in the James Bond diet.

Since Daniel Craig was already over 40 while he was shooting for the last Bond movie, he adopted special care to follow a low carb diet during his training period for the maximum period. This was because metabolism at that age is already slower and eating too many carbs would affect results from his workouts. He avoided refined carbs after 2 pm and remaining carbs after 5 pm.

This was one ironclad rule which Daniel Craig had to follow was to give up smoking without any compromises entirely. Smoking is never good for your health. However, when you are James Bond, you cannot afford to have the risk of lung cancer when you are responsible for saving your country from terrorist organizations.

4. Drinking only on Weekends

Yes, we do know that James Bond prefers his martini shaken not stirred. However, Daniel Craig was allowed to drink only on weekends during his active rest period.

Drinking is often related to dehydration of the body, and your body needs water to repair muscles and recover properly. This is because muscles are primarily 75% water, and you won’t do them any good by dehydrating yourself.

Daniel Craig did full body workouts in circuit style two times a week on the first day and last day of the week. In between, he trained a particular set of muscles each day doing 4 sets of 10-12 repetitions of each exercise. A key feature of exercises was that he took little or no break in between exercises so that the heart rate was always up leading to a great cardio in weight sessions as well.

Tuesday- Chest and Back (10 repetitions in each set. Total 4 sets of each exercise)

Wednesday– Legs (10 repetitions in each set. Total 4 sets of each exercise)

Thursday– Shoulder and Arms (10 repetitions in each set. Total 4 sets of each exercise)

The weekend was a period of active rest during which Daniel Craig engaged in light to moderate cardio along with stretching activities. These included medium paced running on treadmill, cycling, hiking, and stretching.

You must be wondering that the above Daniel Craig workout routine looks extremely challenging notwithstanding the strict diet associated with it. However, this is James Bond we are talking about!!

He is the ultimate super spy so his workout and diet cannot be like an average person. You can also follow the above James Bond training plan and diet if you want to have a gorgeous body like Daniel Craig.

You can also try this Wolverine workout which Hugh Jackman followed to get into shape for X-Men movies.