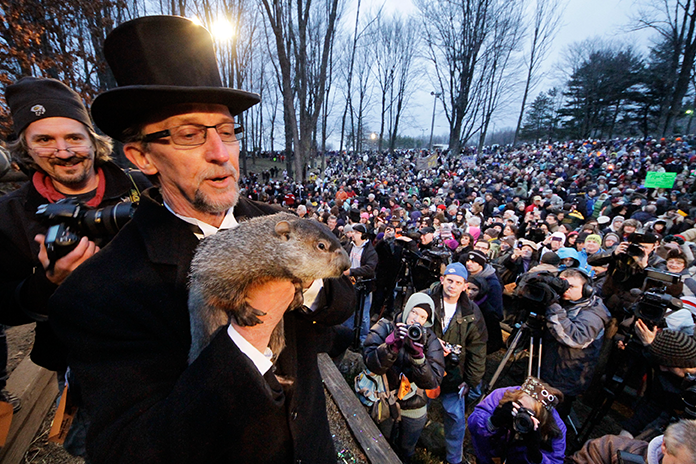 Groundhog Day is unlike any other holiday in the US. A small rodent comes out of the burrow, looks for its shadow, and based on it, predicts the end of winters. How crazy is that? Isn’t it? After all, that is what you saw in the Groundhog Day movie, right?

Well, if you think so, let us tell you that the origin of the Groundhog Day is based on the sleep cycle of hibernating animals. Usually, at the end of winters, these animals wake up from their sleep indicating the arrival of spring.

While you might already know this thing about Groundhog Day, you’ll be delighted to know these damn interesting facts about this unique holiday:

1. Groundhog Day originated from German custom which in turn had borrowed it from European tradition

2. Hedgehog was originally chosen as the animal forecaster by Germans.

To celebrate the tradition, Germans had chosen hedgehog initially but they found groundhogs in large numbers in Pennysilvenia. So, they chose it as the official animal and the day began to be known as Groundhog Day.

It is from that day the groundhog became popular as Punxsutawney Phil and became the official groundhog forecaster. Phil has been making a prediction for over 120 years now. Groundhog Club, set up in 1880, takes care of the rodent as well as of all proceedings on February 2.

4. People ate groundhogs on the first Groundhog Day in 1887

Yes, that is true. On the first day, there were several groundhog dishes served to people in Punxsutawney, Pennsylvania. However, once the popularity of Phil began to rise, the Groundhog Club decided to eliminate groundhogs from the menu.

Well, that is one cool name for a rodent, you have to agree!

6. Only president of the Groundhog Day club can understand the language of Phil

Phil speaks to the president of the Groundhog Club in “Groundhogese” after the prediction. The president then translates the message of Phil for the public.

7. The prediction of Phil have rarely found to be accurate (39% to be precise)

Although members of the Groundhog club claim the predictions of Punxsutawney Phil to be 100% true, meteorologists have never validated the claim. In fact, National Climatic Data Center studied the temperatures from 1988 to 2012 to check the predictions of Phil. As it turns out, they were true only 39% of the time.

8. In reality, a groundhog is not looking for its shadow when it comes out of the burrow.

Groundhogs are, in fact, looking for potential mates as they begin preparing for the mating season in March. You may even think of it as a Valentine’s Day for groundhogs.

9. Punxsutawney Phil does not live in the natural burrow.

Instead, it lives in a man-made shelter in conditions of controlled temperature. Groundhog club members usually take care of its needs and support it in the growing phase.

10. There are other Groundhogs in addition to Phil who make predictions about the spring

Punxsutawney Phil is not the only weather oracle animal out there. Canada also has its own groundhog named Wiarton Willie who has been predicting the arrival of spring since 1952. Similarly, Georgia, Alabama, Atlanta, and many other places have their own version of groundhog animal.

So, you see Groundhog Day is pretty interesting and fun holiday. You do not need any special arrangements, decorations, gifts, or any other things to celebrate this day. Just enjoy as you see people go crazy whether that little animal sees its shadow or not.

After all, whether late or early, winter is bound to end sometime paving way for the beautiful spring. And soon you’ll be immersed in the spirit of Easter. In fact, go ahead and check out these exciting Easter facts now!