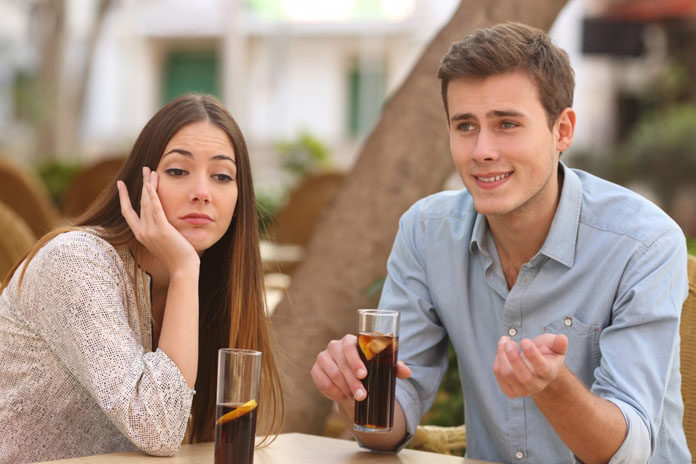 Have you ever been hopelessly in love with your partner only to find out later that he is not over his past relationship? Are you currently in a situation when your boyfriend still goes misty eyed when talking about his ex-girlfriend?

Related: How To Be Best Boyfriend In The World?

How To Be The Best Girlfriend In The World?

It is tough to deal with such cases as one hand, you love this guy so much and want to be the only girl in his life. On the other hand, it hurts you to see him in pain of the old wounds from his earlier relationship.

What should you do in such situation? Should you leave or trust him to forget his ex-girlfriend with time? Do not worry as you can do some thoughtful things which could help your boyfriend in forgetting his past and focus on growing a relationship with you:

Top 10 Hidden Yet Valid Reasons Why Your Girlfriend Hates You

[ALERT] If You See These Signs, You Are Surely Dating a Wrong Guy

This is the primary thing you must do when you find out that your boyfriend may not be over his ex-girlfriend yet. You are bound to feel jealous that your guy still has memories of his past beautiful relationship which went bad.

However, if you want to make your relationship work, control this feeling and do not make it visible in front of him. It may drive him away from you which you would definitely not like. Try to understand his feelings and acknowledge them kindly.

2. Encourage Him to Talk to You

Invite your boyfriend to open up to you and speak to you often. Occasionally you may have to listen to his former relationship and girlfriend as well, but do your best to steer the discussion away from that topic. Get to know him better through these honest conversations and make him feel loved and connected with you.

During these conversations, let him know how much you love him and appreciate him opening up to you. Get him feel your presence, love, and warmth so that he cannot even think of his ex.

3. Never Bitch about His Ex

It may give you a temporary relief but bitching or bad-mouthing her former lover in front of him can do more damage than you can think. Contrary to popular belief, guys usually have a harder time in getting over a relationship than girls. If you speak ill of his ex in front of him, not only you are reminding him of her again but also putting a terrible impression on him as his girlfriend.

4. Engage In Physical Activities Together

No, it is not what you are thinking although indulging in the pursuit of physical pleasure regularly can indeed take his mind off his former love! Apart from this obvious activity, you can go to gym and exercise together or take part in something he loves to do. Do not forget to flaunt your personality while you both are sweating during an intense workout session!

When your boyfriend is still stuck in his old relationship and cannot forget his ex, it will not help if you go all over him. Instead, seduce him from a distance and unleash your teasing and sensuous side to make him come towards you. Let him know in a subtle manner that you are way hotter and attractive than any of his past girlfriends combined. In no time, you will see him gravitating towards you.

In the initial stages of your relationship, you may not want to restrict the freedom of your boyfriend too much especially if you feel that he is not yet over with his past relationship. Let him go on a boys night out with his buddies or on a solo trip if he wants so. Let him enjoy the freedom and give him time to get over his ex-girlfriend in ways he likes.

7. Stay Out of Friend Zone

This is the most tricky part even if you are already in a relationship. It is highly likely that you may be just a rebound relationship for your boyfriend if he is still reminiscing about his past. Find the truth behind his feelings and ask him honestly.

You may be thinking that you are in a relationship with him but he may just think of you as a good friend which you obviously know is a dangerous place to be in. So, make sure you are way out of the friend zone as you take steps to make him forget his ex.

8. Make Him See His Self Worth

When a boy breaks up from a relationship which was perfect in his eyes, it takes him much time to recover from it. There is a huge dip in his sense of self-worth and self-esteem as he often blames himself for not being able to sustain a beautiful relationship.

So, you must consistently make him see his finer qualities and complement him on his unique traits. It would not be too difficult for you as those things are what made you fall in love with him.

13 Most Expensive Divorces Which Will Blow Your Mind

9. Do Not Be Afraid of Tough Talk

Yes, you love him a lot and want to be in a loving relationship with him. However, if he is showing all signs of not getting over his ex-girlfriend, you must confront him and have an open conversation about it. If he really wants you to be a part of his life, he will make sure that you stay in his life. However, if he is not yet ready to be in another relationship, you must decide if you want to remain in this one-sided relationship.

10. Have Patience. Give it Some Time

Sometimes it is just a matter of time before a person gets over his former relationship completely. If you feel your boyfriend is not yet able to get over his ex-girlfriend, give it some time and have patience. During this period, always be there for him and slowly help him by getting him interested in his new relationship with you.

Bonus Tip: Know When to Let Go of Him

The truth is it is never in your hands to make your boyfriend forget his past. You can only make efforts to strengthen your relationship with him, and he must strive to let go of his former girlfriend and set up a new life with you. However, if you find yourself waiting for a long period without any signs of him getting over, it is time to let go of him.

Do not let yourself sacrifice your own happiness and joy in waiting for a person who may never be ready to be with you In the worst case; he may even get back with his ex-girlfriend which will make you suffer like anything. Therefore, know when it is time to let go of him.

We know how difficult it is for you to deal with a situation like this. However, you do not have to leave him immediately on finding that you may just be a rebound relationship with you. Instead, try the above thoughtful things and see if he can realize your value in his life and let go of his past.

Have you ever been in a situation like this? How did you deal with it? Share with us in the comments below.

Also Read: 13 Most Expensive Divorces Which Will Blow Your Mind.

11 Commandments to Be The Best Girlfriend In The World